OptiMA, Inc. principals, Christine and Doug Klimavich, are partners in business and partners in life. You might say it was a match made in heaven. 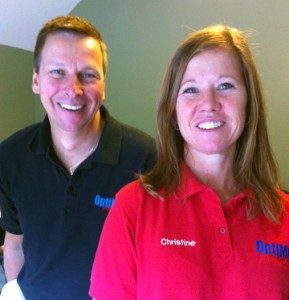 The pair met as undergraduates as Bentley University, where each honed different skills that would be critical to their future success. In her role as the company president, Christine’s tax and accounting skills come to the forefront. Doug focuses on the four P’s of marketing: products, place, pricing and promotion.

“Being raised in a family of self-employed business people, I observed firsthand the benefits, rewards and challenges of operating your own business. I recognized early on that Doug had the drive and dedication of a business owner – his disposition was all too similar to that of my Dad, who was a general contractor and developer. My parents taught me you can do anything you put your mind to and I knew that with Doug anything was possible. We are gifted with perseverance, patience and follow-through  and we make an awesome team.” says Christine.

At Bentley, Christine majored in accounting. After graduation, she went to work for one of the former Big 8 accounting firms, Ernst and Young, where she obtained the necessary experience for certification as a public accountant in the state of Massachusetts. “Auditing so many large companies was an education in itself,” she asserts. “I was exposed to different industries and practices, corporate organizations and cultures and, in the process, gained tremendous business perspectives.”

Later, Christine returned to Bentley to earn a master’s degree in taxation, further complementing her business skill set. Her love of teaching also landed her a position as an adjunct professor at Bentley for a few years. “Teaching is a passion of mine – sharing my knowledge and encouraging others to learn is the best! My employees now have the benefit of all my experiences, which I am more than happy to pass on.  Our company is a team effort and our greatest resource is our employees – without them, there is no company,” says Christine.

Doug learned a good work ethic from his parents, too, both of whom worked multiple jobs. His mom waited on tables at a local restaurant; his dad was a talented commercial artist and sign maker.

Both parents also worked day jobs in the shoe manufacturing industry to make ends meet, but it was Doug’s own experience as a summer employee in the same shoe factory that convinced him he wanted to get a good education and pursue a different path

“My dad spent most nights and weekends lettering signs and trucks for local companies the old-fashioned way, with oil paint and a brush,” says Doug, “So there’s something kind of right about my current focus on the custom printed dry erase board market.”

Doug knew at an early age that he wanted to run his own business. When he was just 10, he got the notion that he could make money picking blackberries and selling them to the local farm stand, and he did. After that, he was hooked.

His first job out of college as a part-time shipping clerk at a high-end Boston gourmet house wares firm lasted just three months before he got promoted to warehouse manager. In fairly quick order, he was promoted again to assistant sales manager and then he was asked to help the owner manage a new company he’d purchased, one that dealt with the industrial cleaning supplies that would later become the basis for his own first business venture.

While Christine’s role at OptiMA is fairly well defined, Doug’s involvement in the company is more eclectic and covers everything from deciding which products to offer to building and managing the company’s websites, to determining future development projects for the company. Christine calls him “the perpetual entrepreneur.”

Together, they are yin and yang; dependent opposites that keep each other – and the company – in balance.

“It’s an exciting business where hard work and diligence pay off,” says Christine. “Doug and I take great pride in knowing that our business is making a vital contribution to other big-name companies, athletic organizations, scientific, government and military agencies across the United States.”